The opinion of most people that iPad is still at the level of toys. But Apple is clearly focused in the future to combine the computer and the tablet in something common. And perhaps we will soon see something concise, convenient and perform all the basic functions of a computer.

In this article we will discuss how professionally create the animation with IPad.

The most interesting and useful function for iPad is run Dragonframe directly on the tablet and cordless management camera with iDevice.
Dragonframe is the most popular program for creating stop-motion animation under the operating system Mac OS X and Windows. Previously the program called Dragon Stop Motion.
Principe work of program is very simple. DSLR camera connects via USB connection to computer and Dragonframe controls all camera settings and allows you to watch live view image, comparing it with previous images using alpha-blending or mixing layers.
Dragonframe has only one drawback — the computer is always connected to the camera and severely restricted in movement in the set, because the maximum length of USB 4.5 meters. Even it is a small MacBook Air, for its weight and form factor is not ready to move in a convenient place for the eyes animator. Even before the iPad, many animators thought about the wireless screen and Apple has created this.

But Dragonframe available so far only for Mac OS X and Windows, but not for iOS. But look at the AppStore and you will see that there are many applications for iOS, which allow access to remote computer screen. To date the most successful such application is the Air Display (10$). It allows you to use the display iPad as a second monitor of computer with touch control functions instead of the mouse.

What do you need to make it work?
— camera, which are supported Dragonframe (eg, Canon 5D mark II, 7D, 60D, 550D, etc.)
— USB cable (miniUSB — USB)
— a computer running Mac OS X or Windows (we tested only on Mac OS X Line 10.7)
— Dragonframe or Dragon Stop Motion (or other programs, such as StopMotionPro or iStopmotion)
— iPad
— application Air Display
— remote Keypad Controller (included with the purchase Dragonframe) or Bluetooth keyboard
— you can also use a Bluetooth mouse, magic trackpad or stylus for iPad (such stylus developes Wacom). Mouse or stylus may need, because the interface Dragonframe not designed at the touch interface.

There are still restrictions on the technical characteristics of the computer, for example, one of our computers, MacBook Pro did not want to work with the program Air Display. This MacBook has 2 video card NVIDIA GeForce 9400 and 9600GT, these video cards are not supported by the application. 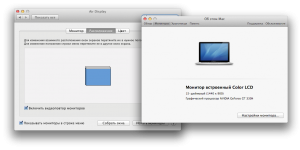 The second attempt was more successful. We are connected iPad to the MacBook Pro with graphics card NVIDIA GeForce GT 330M. But the active window Dragonframe (tab Animation) mode on a second monitor did not want to work and gave out a white box instead of pictures live view.
The only way to solve this problem is to include duplicate images on both screens. That is a picture of Macbook is duplicated on the iPad.

Now everything is working, and do not have to turn head from the scene to a computer for comparison shots. Now you can place your monitor where you want. Important to remember that this is not just a monitor. It is interface with touch control.

We hope that the developers of Dragonframe will create a version under iPad. 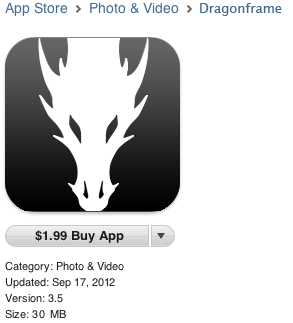 Someone might ask: «Why not use existing tablets running Windows to work with Dragonframe?»

The answer is simple. You will then have to connect the USB cable directly into a tablet, that when the tablet will often lead to loss of the cable. Of the existing tablets iPad has the long-playing battery. So whether you need to communicate at all with Windows?

At the end of this article we will tell you about six programs that we use when shooting.

Bamboo Paper (free / $ 2) — Convenient application for drawings instead of the paper, creating storyboards and notes. It is free, but if you pay $ 2, you will have synchronizing function c Dropbox and Evernote, as well as the opportunity to share notes on different virtual book.

iTimeLapse ($ 2) — This application allows you to create timelapse or animation to preview or to check the place of shooting. There is also an opportunity to take a picture of the clap: the camera makes the frame after a loud sound.

Clock Pro (free / $ 1) — This application shows the time by different methods. It is like a metronome, put up for any time intervals, as well as information about sunrise and sunset, necessary for those who shoot timelapse of nature. A program of PD Maps (free) shows the azimuth of sunrise or sunset.

Eye-Fi (free) — This application allows you to work with memory cards Eye-Fi, which transmit photos directly from any camera on the iPad or iPhone or directly to your computer. Also this application has an opportunity to publish photos from your camera directly into web albums Google Picasa or Facebook.

Air Display ($ 10) — This is a program about which we have today discussed above, which allows access to the remote computer’s screen.