This article focuses on our new stop-motion animation «I LOOK & MOVE». Here we consider a sequence of frames in some scenes and process of the shooting.

Our new stop-motion animation lasts 1 minute 30 seconds and consists of 1072 images. You see only feet in the picture. Shooting was carried out above at the level of human eyes. Frames were compared by hand without using the software for take pictures. We moved away from the traditional rules of creating stop-motion animation and shooting animation by hand in most scenes.

All the scenes were shot in Moscow. Because cartoon has a spirit of the city. Through the use of the two Moscow sites for credits, this stop-motion animation has become a spirit of Moscow. Even the beach scene was shot in the capital. It was the beach of Moskva River.

See I LOOK & MOVE in a larger map

Because shooting the film was conducted outdoors in an urban environment  basically, we encountered several difficulties during the process of creating animation. Rainy weather, people fall into the frame, a broken SD card, a ban on filming in certain places — all this hindered the creation of our new cartoon. We spent a lot of time trying to find a suitable place and implement all the ideas on the level at which we are presented.

Also we would like to note the Russian feature of privatization of the pavement and asphalt. Near Polyanka we had to talk with the head of the business centre. And we managed to find out that the owner of this business centre prohibited photographing and filming at this territory, although the area is open for walking. In general, all the time while creating this animation, we faced with a lot of comments about banning of photography in certain places. But the majority of this comments came from the police, who simply executed the «law», guarding the secret and military objects. 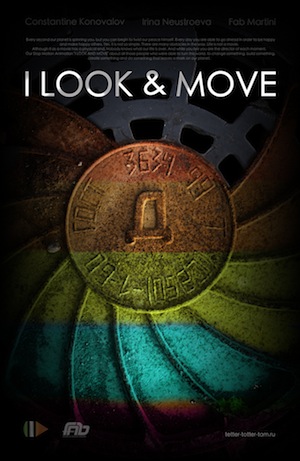 After each shooting day, we treated photographs and mounted photo sequences diligently. We began a creation this stop-motion on August 16 and finished in mid-October. During this time we were able to complete the three animated projects. Installation of a new cartoon and postproduction lengthened due to the fact that we had to impose a large number of masks for staff using Apple Motion 5 (150 pieces). All because of what we have often found the right place, but it was a little dirty. We took a broom and rags, swept and cleaned the asphalt to give the cartoon aesthetics. Unfortunately, Moscow is a dirty city, and we made our own contribution in the improvement of this situation. But not everything can be improved by improvised cleaning means, so we had to use the software to remove all obstacles.

The most stunning development was the failure of our working camera Sony a33 while shooting one of the last scenes of our cartoon. We were already at the stage of completion of the film when the camera is simply no longer included. We wanted to find out the cause of damage the camera, not slowing down the process of shooting. The rest of our cameras are not fit to continue shooting for a different size matrix and the compatibility with the lens. Since we connected the scenes that were shot in different parts of the city frames had to be maximally similar to each other in size, which depends directly on the matrix and the lens. We rescued our friend Max Sudakov. He gave us his camera Sony a550 to continue filming (matrix of Sony a550 such as matrix of Sony a33), and the Sony a33 we have given in for repair. Thank you, Max!

We would also like to thank our friend Nicholas Starshinov for participation in a test shooting of experiments of this animation.

And in late October, we have determined the final duration of our stop-motion animation, and sent it to Italy … by e-mail into the hands of a talented composer and sounddesigner Fab Martini. New style of FXs and music to this animation is work of his hands and ears. Fabrizio quickly understood us and immediately went to work. Thank you very much, Fab!

To view the frames, use the horizontal scrolling to the right →

1. Frames are shown here describe the combination of the feet for connecting to different scenes.

2. The scene with the hatch. We have shot various hatches for images recoil from the impact. So the  human eye saw this as a deformation.

3. Frames are shown here describe rotation of space. We selected the specified point. The rotation occurs around this point

4. The disappearance of sneakers  was done with use paper. In the intermediate frames we used different pieces of paper instead of sneakers.

5. Frames are shown here describe the transition from the sharp movement. Shooting of first scene took place in Moscow river, and then shooting took place in the fountain at Victory Park. Here we would like to note the exact synchronization of movement of leg. In the second frame you may notice that the leg is already wet. The water hit it in the course of numerous takes to synchronize. But in the general animation human eye does not notice this fact.

6. Frames are shown here describe appearance of the card from the phone.

7. Spectacular landing is actually made up of entirely different photos taken at different times.

8. Frames are shown here describe rotate the hatch. In animation it seems that the hatch rotates, but in reality everything is relative. Man revolves around the hatch.

9. Frames are shown here describe physics of braking. How to give the effect of interaction between two objects? You can use the stones.

10. Frames are shown here describe another change the plane in motion. In the third frame is shown that the person falls (picture taken in the fall) and the tilt of the camera changed. And in the fourth frame the person just lifted his leg and standing safely on the pavement.

The video has a lot of effects and they are all made by hand without using special software.

The whole movie we shot together (Constantine Konovalov & Irina Neustroeva). But at the beginning of filming we sometimes put our other camera on a tripod. So we did little making of our new animated film «I LOOK & MOVE». This video shows the shooting of three scenes, one of which we decided to exclude from the overall concept.